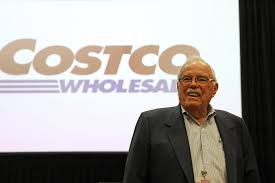 When you enter Costco, you are filled with bulk items at low prices.  While their are many items that give you tremendous bang for your buck, none can beat the hot dog and soda combo for $1.50 offered by the food court.  What’s more impressive is that the price of the combo hasn’t changed since 1984 and if founder and former CEO Jim Sinegal has anything to say about it, it never will.

When Costco president W. Craig Jelinek once complained to Costco co-founder and former CEO Jim Sinegal that their monolithic warehouse business was losing money on their famously cheap $1.50 hot dog and soda package, Sinegal listened, nodded, and then did his best to make his take on the situation perfectly clear.

“If you raise [the price of] the effing hot dog, I will kill you,” Sinegal said. “Figure it out.”

Why is Costco willing to sell hot dogs for such a low price? Because the value in goodwill that they receive from their customers is exponentially greater than the profit margin hit from hot dog sales.

Over the years, they have had to make changes to their suppliers in order to keep the price at the same level of 1984. In 2009, they stopped using Hebrew National and moved production in-house with their Kirkland brand (and now have two plants dedicated to making hot dogs). In 2013, when their deal with Coca-Cola ended, they made the switch to Pepsi.

Foot traffic is crucial to the success of Costco’s business and things like their commitment to the price of hot dogs show why they have such a competitive advantage over other grocers and retailers. Today, Costco sells over 100 million hot dogs annually, which is more than all MLB stadiums combined.

Next time you are at Costco, grab a combo from the food court, and thank Jim Sinegal for his willingness to kill for that price.

View all posts by rbroma